You may have noticed a bit of a gap in posting lately. This has been due to Matthew being ill! When we got back from Birkenhead last time by midnight of that night he was quite ill. By the Friday he was in Hospital and on the Saturday he was having an operation which included having his appendix out! He has been slowly recovering since hen and has been desperate to get back out traveling on the buses. We had agreed with him that this date was to be his first date we could take him out and he decided he wanted to go to Birkenhead again. No research was done for this trip, we just grabbed the timetables we had picked up last time to take with us again.

We set off around 12:00, but unfortunately I had forgotten about the early kick-off between Stoke and Blackburn. As such we got caught in traffic for around 30 minutes! We had a quick stop at Uncle Dave's house to pick something up and then we continued on our journey. Listening to the match on the way up we arrived in Birkenhead just after half time around 13:45. After taking a while to get a parking space. We set off to get something to eat and as we passed the bus station we saw a required Dart 7547 on a service #409. 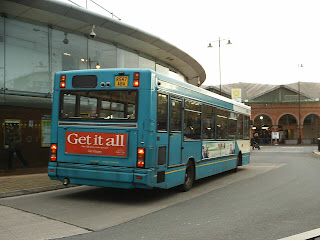 As the burger stall in the market was quite busy, we went to Platters for dinner. Matthew had a small breakfast with extra stuff of mums full breakfast. I had a bacon toastie and Uncle Dave had a sausage sandwich. Whilst we waited for the order, I went to get our saveaway tickets and to pick up a couple more timetables and a Wirral bus map. From the timetable, we worked out that 7547 would be back in the bus station around 15:00.

After dinner we walked up to the bus station and Matthew took a few pictures whilst we waited for the bus we wanted to return. Of interest was First Manchester double decker 34236 on a #38 New Ferry service. 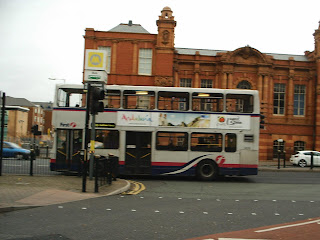 As 15:00 approached we decided to walk down to the stand and the bus pulled in. The bus was reasonably well filled but it wasn't full and standing. We decided to do this bus just to Seacombe Ferry for a couple of reasons. The main reason was to cover the other bus that was out on #409's hoping it would be a similar Dart. The other reason was that it is a bit like a miniature bus station and we might sea a couple of buses come and go whilst we were there. As we alighted Matthew got a picture of the bus we traveled down on. 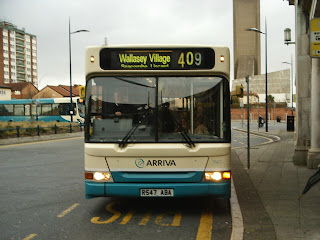 Arriva 3011 was standing and was about to work a #403 service. After a couple of minutes a required and interesting Dart appeared displaying #403 in the form of Arriva 2283. So we decided to skip the other 409 and to do this whatever it did. After a few minutes the bus was displaying #413 Birkenhead and it pulled onto the stand. It became apparent that the buses on #403 and #413 must interwork. 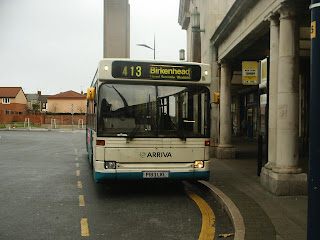 We got onto this fine but ageing Dart, and Matthew took a picture of the interestingly coloured interior of this bus. 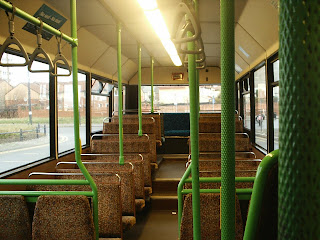 We set off on this service and it was virtually empty. The bus wound its way to Liscard picking up passengers as we went. By the time we left the 'bus station' at Liscard the bus was full and standing! We then headed to a placed called Leasowe and as we passed through an estate the bus virtually emptied out again. We then reached a level crossing and there was a bus in front of us and about 10 or so cars. After around 10 minutes we started to suspect something was wrong regarding the crossing. The cars in front being smaller were able to turn in the road and to to go back. We eventually got to second in the queue behind 3011 on the #403 service. People started to leave the bus one by one but we decided to stay for a while. after around 30 minutes I looked at the Wirral bus map to look for an alternative way of getting back to Birkenhead. new had come through that there had been an incident at Bidston and the barriers had to stay down until an ambulance had been sent there. We then decided to abandon this bus in order to get back as quickly as we could. So we got off the bus and crossed the line via the footbridge on Leasowe station. As we crossed I got a picture of the buses lined up at the crossing, We walked a couple of hundred yard along Reeds Lane until we reached Holylake Road. On the corner was a shop from which we brought lottery tickets and some pop. We rounded the corner and walked to the nearest bus stop. After inquiring with a local, we found out the next us would be either an Arriva #407 or a First #38. Having seen a Scania single decker and the double decker 34236 on this service, we were hoping for double decker to turn up. What actually turned up was even better! Just after we saw the procession of buses from the crossing go past in the opposite direction, First Manchester Optare Prisma 60449 appeared in the distance! I recognised it the type immediately even though we had only ever seen these buses in photographs. Because it was in slow moving traffic we were able to get a picture even though it was nearly dark. 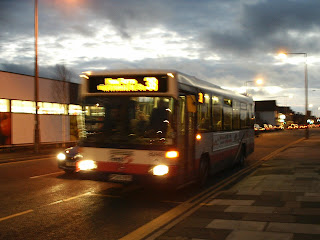 We got on this bus and did it back to birkenhead in darkness. As the bus emptied Matthew got a picture of the interior. 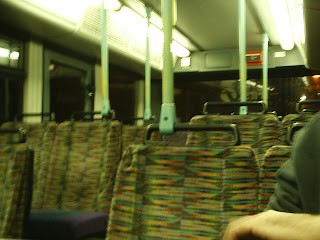 In Birkenhead after getting a couple more picture we returned to the car for sausage rolls and pop. As we traveled back we heard that Stoke had one 3-1. My lucky T-shirt had worked again... We stopped ant Longport for LPG and we got back home for around 18:30...Mark
Posted by Mattybuzz at 20:49 No comments: