Originally, Matthew had planned to go out on the 27th, but having seen that it was going to be a Sunday service we persuaded him to go on the 29th instead. After finishing work we set off towards Ellesmere Port. We weren't sure if the market was going to be open, but lucky it was! After dinner we went to the bus station and waited for the 401. Whilst waiting he took a few pictures... 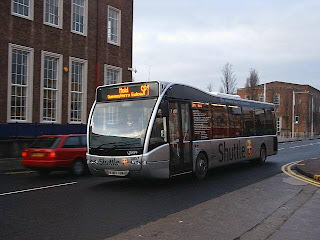 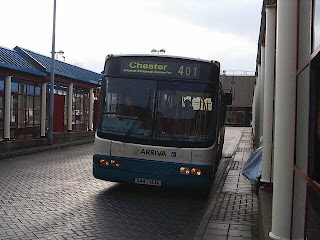 We then spent around an hour taking picture in Chester bus station. Unusually the 27 was worked by S760 RNE instead of the usual Optare Solo. 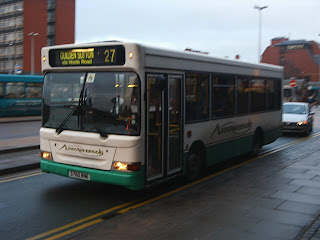 Today the 401 was mainly cadets another example being 2441. 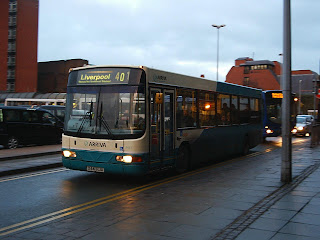 Eventually when mum turns up by car from Ellesmere Port, we do a bus but just as far as Gorse Stacks 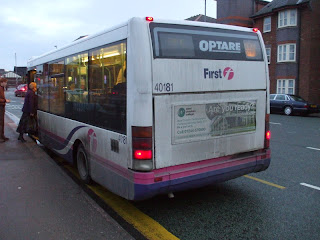 Back to the car for sausage rolls and then home... (mark)
Posted by Mattybuzz at 13:47 No comments:

Despite the bad weather, Matthew had not been out on a trip for 3 weeks and we knew it would be at least another 2 weeks before he could go out again if we did not go out today! Snow and ice lay all around in these parts, but we hoped that the coastal towns would be milder and hopefully free from ice and snow. Matthew had indicated to us before that he wanted to go to Southport, but previous plans to travel here were always changed and he ended up somewhere different. Research for this trip consisted of printing out the Arriva network map for Southport, plus the Southport area map from the Mersey Travel site. From the Sefton local government site, we also learnt that Southport had no bus station as such and was all on street bus stops. The weather was checked the night before, and it said there would be heavy rain all afternoon! We discussed on whether we should divert to Chester because of the predicted weather. On the day of the trip, we checked the weather. The situation had now improved to fog and drizzle! we asked Matthew again if he want to go to Chester or Southport and he was adamant we were going to Southport. We departed at around midday. As we left Staffordshire most of the ground was covered in ice and snow. Travelling North along the M6 and then onto M58, by the time we reached the A570 there was virtually no snow anywhere, just fog and light drizzle. Our route took us through Ormskirk, where we saw a taste of thing to come passing a Comfybus Optare Solo and an Arriva double decker. On entering the town centre, it looked fairly busy and I could not spot anywhere obvious to park, so I decided to drive through town and follow the signs for the park and ride. Just the other side of town was the Esplanade park and ride site. on arrival we ate some of our packed lunch and toiled before getting on a bus. First arrival was Arriva Enviro 200 2144, which we promptly did back into town. 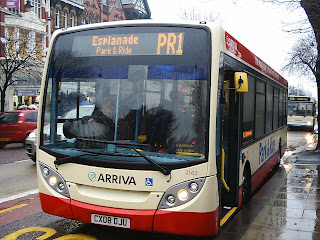 The usual thing for us to do on arrival in any new town is to stand and watch the buses for a short while whilst we try and learn what kind of services run and what type of buses work on them.
The first bus that we saw was a wrinkly dart 2287 on service #49A to Woodvale, which pulled up right behind us and had a driver change. Whilst this was going on I looked at the map and decided that this would be a good bus to start riding on, and also it was freezing cold and damp outside! I checked with the driver what the service frequency was to which he replied "15 minutes". Tickets purchased, We decided to go to Ainsdale which was just before the loop end of this service. 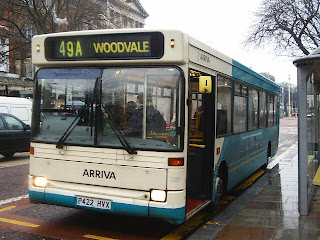 On arrival at Ainsdale, we crossed the road and waited for the return journey into Southport. At this point we weren't sure if we would get the same bus back, or a different one. A few minutes later, a wrinkly Dart appeared from around the corner. Expecting it to be the same bus, we were most surprised when it turned out to be 2288! 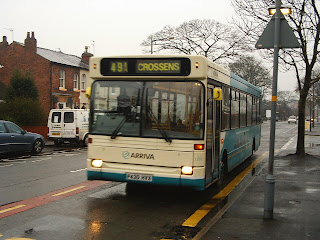 So on we went back to Southport. When we in town, we had previously neglected to check out the local landmarks so we could tell if we were back at the same stop. When we got off in Lord Street this time we were a stop further down, and we were opposite a bandstand instead of the monument. On the previous journey we had passed a couple of different Marshall bodied darts, which we knew Matthew would welcome travelling on, so plan the was to go back in the same direction, but this time we were only going to travel as far as Birkdale. The next #49a to turn up was 3044. A bit on the new side, but we decided to it anyway because there was a good chance of something interesting coming back. As wet got off, Matthew photographed the bus as it disappeared around the corner... 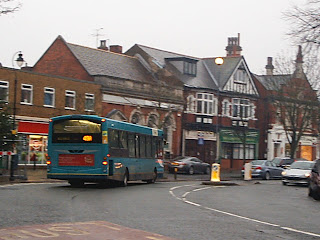 Crossing the road, we had about a 10 minute wait for the bus back. Matthew was kept amused by the scrolling advertising in both of the town bus stops. As expected Marshall bodied Dennis Dart rounded the corner, 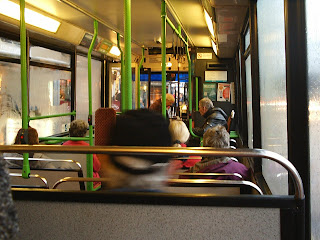 We did the short journey back to town. During the journey we contacted mum so that she could get some food and we could meet up. She explained she would be about 5 minutes and then she would get some hot food to take back to the car. This time we went to the monument bus stop in Lord Street. Matthew photographed the bus as we left. 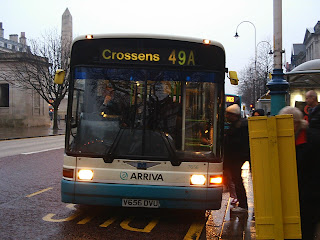 So whilst we waited, Matthew and I were able to take a few more photographs in the fading light of an early December evening. By this time, the rain had all but stopped so we had barely gotten a drop of rain on ourselves during this dismal afternoon. Most photographs at this time were taken of still buses, leaning against street furniture to steady the camera
. 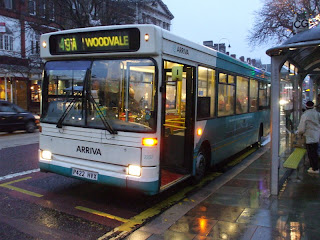 After letting 2 very full P&R service go waiting for mum, she turned up with chips which we sealed up in our rucksack. after a short wait, 2144 turned up and was once again or transport back to the park and ride site. On arrival, we went around the outside of the building and took a distant photograph of the bus and terminal, steadied on a metal fence post. 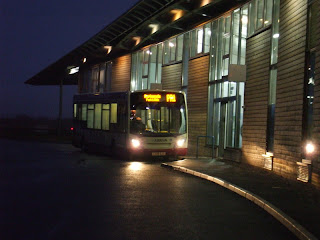 Back to the car, we ate chips before an uneventful journey home. Despite only minimal planning and bad weather, this turned out to be a good trip and we will definitely return here again in the future... (Mark)
Posted by Mattybuzz at 14:30 No comments: